Veteran and long-time supporter of PHCC creates an emergency fund for the college. 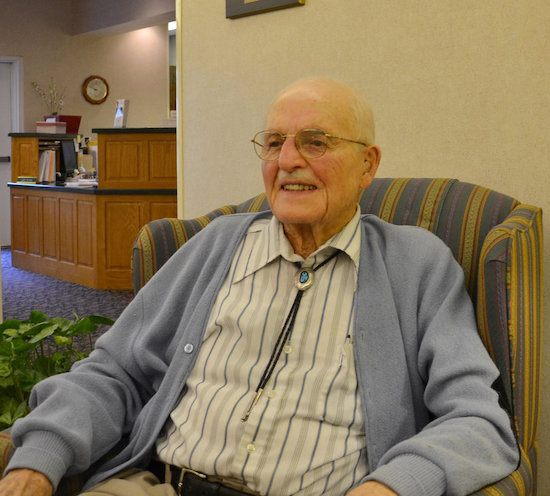 Colonel J. Shelton Scales has recently changed his beneficiary designation on his life insurance policy to the Patrick Henry Community College Foundation. The proceeds, totaling $10,000, will be used to fund the Shelton and Stacy Scales Emergency Fund, named after Scales and his late wife.

Scales, who moved to Martinsville in 1946, opened his National Service Life Insurance policy in 1940 when he joined the United States Marine Corps. “Luckily I didn’t have to use it, or my kin during the war,” he explains. “So now as I approach my 96th birthday, and my four children are all well-off,  I wanted to do something with the policy.”

After speaking with PHCC President Angeline Godwin, they agreed to establish the Emergency Fund to serve as an expedited source of money for needs that may arise.

“I’ve always been very proud of the college,” Scales says. “It’s the best thing that’s happened to this area since I moved here. Since there are already a lot of scholarships, Godwin and I agreed that this fund was a good approach.”

Scales hopes that more people will contribute to the fund over the years so that it will continue to grow, explaining how in his obituary, he wants it to state: “In lieu of flowers, please send a contribution to the Shelton and Stacy Scales Emergency Fund.” He has already asked his children to mail his obituary to his friends throughout the country to hopefully gain more donations.

He attended the University of North Carolina, earning a bachelor’s degree in commerce in 1940. In the same year, he enlisted in the United States Marine Corps, serving as an instructor in the Marine Corps Schools at Quantico, Va. He participated in four amphibious landings in the Marshall Islands, Saipan, Tinian and Iwo Jima. For the Iwo Jima campaign, he was awarded the Legion of Merit Medal.

Of his contribution, he states “it’s a start, but if we could build it up over the years, it could really be a sizeable amount.”

Make a donation to the Shelton and Stacy Scales Emergency Fund.