Leaving a path to education for the next generation 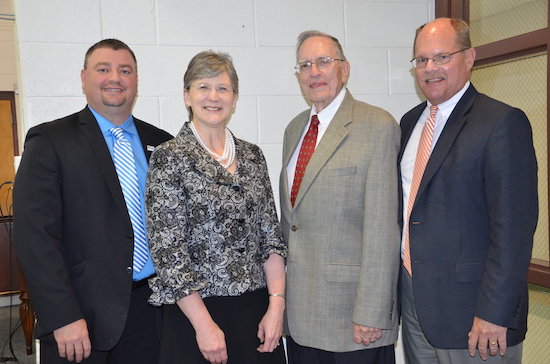 A classroom in West Hall has a new name after approval from the Patrick Henry Community College Board to honor a local family’s continuing support to the college.

The Irving M. Groves Jr. and Jett Carter Groves Classroom is now the official name for West Hall, Room 222. The Groves family has supported the college and its students for several decades.

“The college has been a real asset for the community ever since it got started,” Irving Groves said. “I was on the site when they cut the ribbon for the first classroom at the old Martinsville school when it was still affiliated with U. Va. (University of Virginia). I’ve been around it for a long time.”

He said his relationship grew with PHCC after working with college officials to offer training for employees at the Piedmont Trust Bank (now BB&T) where he served as president. Groves said many of the bank’s employees had to travel to Roanoke or Greensboro, N.C. to attend training courses. He asked if there was anything they could do locally.

“I think that’s what demonstrates the exemplary attitudes at the college – the service,” he said. “When there was a need, they were quick to try and fill it. They not only were accommodative to the bank, but also to many other local industries like American Furniture. If they had a machine and they wanted someone to train on it, the college was quick to offer its services. It’s been a wonderful support for the entire community.”

Groves added that if he brought candidates into the area, PHCC was always a stop on their tour.
“Without exception, folks coming from outside the area were very impressed with the courses available and the quality of the institution.”

In addition to his work at the bank and throughout the community, he also served on the state board for Virginia’s Community Colleges for six years. Groves said he learned a great deal about how the state system functioned, and was pleased to know that PHCC was extremely “well-thought-of” at that level.

“Many times, PHCC had presentations on original courses they were offering that others in the state were not doing, for example, the motorsports program,” he said. “PHCC was always held in high regard, which is a real tribute to the community and to the leadership the college has enforced over the years.”

Groves said giving back to his community through education is a permanent gift that can be passed along from generation to generation.

“Personally, I think there are not many things we can leave to the next generation that are permanent, but education is one of them,” he  said. “I’ve told my children, grandchildren and great-grandchildren that the only thing I can leave them and nobody can take away is an education. I think affording others who may need the help is an excellent way to pull ourselves up by our bootstraps. An education goes a long way.”

The Irving Groves Jr. Endowed Scholarship fund was established in February 1995 with a $15,000 gift from Piedmont Trust Bank (now BB&T) in honor of his retirement. Since its inception, the Groves family has given contributions totaling $254,257 to the college, and 116 student scholarships have been awarded.