A Tailor-Made Recipe for Success

The ed2go program at PHCC helped Nicole Harris excel in her career at the SPCA. 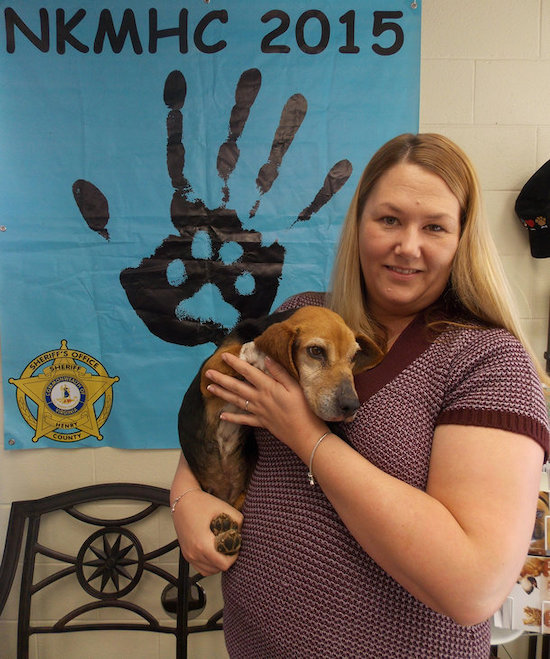 1/2
Nicole Harris, Executive Director of the SPCA, with Chelsea 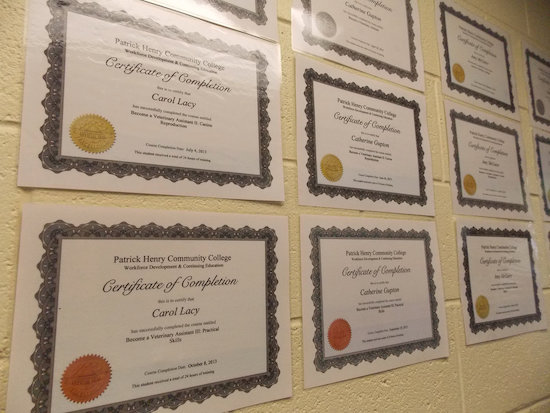 2/2
Staff member's Certificates of Completion from the ed2go program.

Growing up, school wasn’t exactly Nicole Harris’ forte. "I wasn’t your average student," she admitted. "There were 1,000 better things to do, and college wasn’t at the top of my priority list."

But as the Executive Director of the local SPCA (Society for the Prevention of Cruelty to Animals), Harris has realized that without the help of a college degree, she would have never made it to where she is now. And she’s extended that concept to her employees, as well.

Harris grew up in Martinsville, graduating from Laurel Park High School and enrolling at Patrick Henry Community College in 1996. "I quickly learned that I wasn’t a traditional student; I just wasn’t ‘getting’ it," she said.

So in the same year, Harris quit school and joined the Marine Corps to serve as a fueling technician. "It was sick and crazy, but I loved it! It fixed me," she explained. "I was a drifter, but the Marine Corps taught me that there are rules and you’ll go far if you follow them."

After two years in the Marine Corps, armed with a brand-new mindset, Harris re-enrolled at PHCC in the Certified Nursing Program. "We were the ‘Magnificent Seven,’" Harris said of her classmates, the first students to complete the CNA Program at PHCC. "I loved it, and actually enjoyed it."

After graduating, she was hired by Blue Ridge Rehab, where she worked for 10 years, helping with in-home care in her spare time. Her care and attention shifted to animals with the urging of her daughter Claudia, born in 1999.

"Claudia just loved animals, she was so drawn to them," Harris said. "I always grew up with animals, but her openness opened my eyes and reunited something in me that I loved."

So in 2008, Harris took the only job available at the SPCA as a kennel cleaner working at minimum wage. "It was my passion," she stated, and she was content doing anything and everything at the SPCA. The former SPCA Executive Director, Leslie Hervey, "saw something in me that I had forgotten. She took me by my shoulders and said, ‘You can be anything here you want.’"

Harris, with Hervey’s urging, wanted to learn more about animal care, so she shadowed local veterinarians, but her options were limited for a formal education in town. Eventually she discovered the ed2go program through PHCC ‘s Continuing Education and Workforce Development division, which offers three levels of veterinary assistant courses taught online in a six-week format.

After completing the courses, Harris was promoted to Animal Health Care Director at the SPCA, and the doors continued to open for her. Harris soon became the Director of Operations, managing customer service, training of the staff and medical operations. This new position allowed her to dabble in the fundraising aspect of the SPCA, grooming her to assume the position of Executive Director in 2013.

Harris, who had benefitted so tremendously from the ed2go program decided to enroll her staff in similar courses, tailored to their individual positions. "It really ‘rockstarred’ them," she said. "Our staff are amazing superheroes." So far eight staff members have completed the veterinary assistant training, and others have taken a variety of courses from medical math to fundraising.

And luckily for Harris and her staff, the ed2go program is no longer the only option for veterinary training in town. Patrick Henry will now be offering a Veterinary Assistant program with combined classroom and online instruction.

Learn more about the SPCA on their website and Facebook page, and the Veterinary Assistant Program at PHCC.