PHCC alum has the "best job in the world" 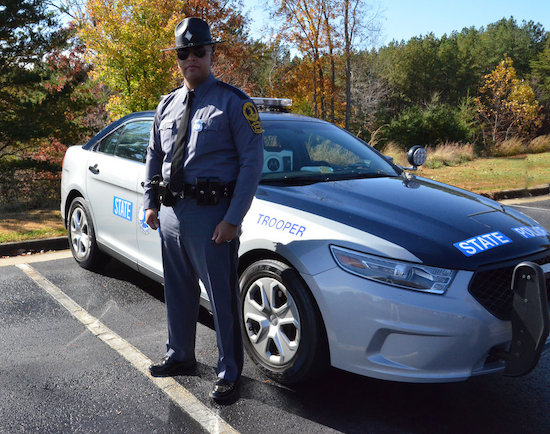 Since he was a teenager, Eddie Dillard had only one dream: to serve the public by being a firefighter or a law enforcement officer. He did both, but settled on one for a career.

Dillard is now a trooper with the Virginia State Police, which is a journey he started at Patrick Henry Community College through the administration of justice (ADJ) program.

“I just knew that’s what I wanted to do,” he said. “In law enforcement, I felt like I was there to help people and deal with their problems. That’s what law enforcement is to me. Most people you run into are having a bad day, and they don’t really care about law enforcement until they need it. It’s rewarding to be there for them.”

Dillard said he’s always been good at dealing with other people’s problems and situations. He said he wakes up every day and tells his wife that he has “the best job in the world. It’s nothing like being there for someone and seeing the look on their face when they really appreciate what you’re doing. People respect officers, and we’re there when they need us. I love every part about it, except the paperwork.”

After graduating from Laurel Park High School in 2002, he enrolled in classes at PHCC that fall. At the time, Dillard said he contemplated going to work instead of transferring to a four-year college.
“My cousin David (Dillard) really disagreed with me and said I needed to go to college, and we would bicker and debate over it every day,” Dillard said. “I would get out of class and go to his office, and we would get back into it.”

During his coursework at PHCC, Dillard said he met his mentor in Bill Jamison, who served as the director of the ADJ program where he taught for 19 years. He passed away in February 2009.
“I worked for Bill as a work study student, and he really helped me out with forensics, dusting for prints, and he showed me how to compare bullets through a microscope,” Dillard said. “He also taught a class with Terry Young and Susan Shearer called social problems, which is probably one of the best classes I took at PHCC.”

Dillard said there were many instructors at PHCC who taught him lasting skills including Michelle Zollars, Joyce Staples, Angela Williams and Barry Reynolds. He also credited retired history professor John Buck for developing his love for history.

In 2004, Dillard began testing for jobs in the area. He took the Virginia State Police test, but ended up not making the cut.

“Bill told me to apply to multiple agencies and that I might have to move away to find a job, so I applied to the Danville and Martinsville police departments,” he said.

After waiting in the Martinsville Police Department hiring pool for a year, Dillard said Danville came calling and started his background checks. When he was about to get hired, former Chief Mike Rogers called Dillard and said he’d hire him.

Dillard worked at Martinsville from 2006 to Oct. 20, 2012 when he started with the Virginia State Police.

In addition to his training at the Piedmont Regional Criminal Justice Academy and the Virginia State Police Academy, Dillard said he received a wealth of experience in SWAT (special weapons and tactics), as a road officer, a school resource officer, and he taught candidates at the Piedmont Regional Criminal Justice Training Academy. He also received an Outstanding Officer award in 2009 from MADD (Mothers Against Drunk Driving).

Dillard currently is working toward his bachelor’s degree at Liberty University. He said he encourages volunteer work, internships and education for anyone pursuing a career in criminal justice.

“I tell anyone who wants to work in this area to join a volunteer organization like a local volunteer rescue squad or fire department,” he said. “It’s not all gunfire, smoke and adrenaline rush. It’s dealing with people’s problems and it’s knowing how to write a report. You need the experience with talking on the radio, arriving on scene, analyzing the situation and then knowing what to do.”