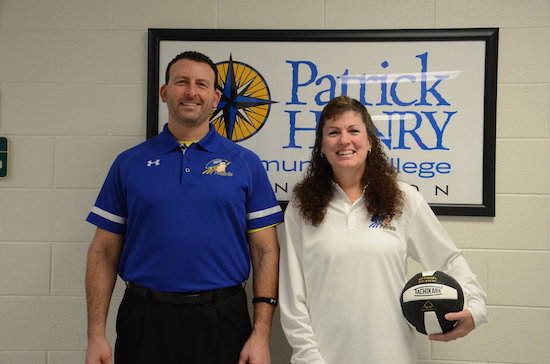 “We’re looking for opportunities to foster growth at our college in adding these two sports,” said Christopher Parker, senior athletic administrator and vice president of institutional advancement. “These additions also are key to Title IX compliance, which will put our numbers at five male sports and six female sports.”

Kelly Proffitt, an assistant professor of mathematics at PHCC, will coach women’s volleyball. Proffitt was a Division II volleyball player at Liberty University. Her team was nationally ranked in the top 10 for her NCAA (National Collegiate Athletic Association) division.

“I’m really looking forward to starting a successful volleyball program at PHCC,” Proffitt said. “This is an exciting opportunity to build a foundation for community college students to participate in collegiate-level volleyball.”

Proffitt has extensive coaching experience serving as head and assistant coach for Bassett High School’s junior varsity and varsity volleyball teams. She also is founder and director of the State Line Volleyball Club, and she established a non-profit junior travel volleyball program serving Henry, Franklin and Pittsylvania counties, and Danville and Martinsville cities.

“Volleyball will be played in Stone Hall,” Parker said, “and our athletic director Brian Henderson is confident the facility will be up to Region X’s elite standards because PHCC has hosted the USA South Conference volleyball championship for the past three years.”

J.R. Smith, athletic trainer and fitness coordinator, will coach the men’s cross country team. He has been part of PHCC’s athletic programs since 2009. He also is coordinator of the 5K Patriot Trail, which introduced the 3.1 mile track across campus.

“It’s an amazing opportunity to be part of building a cross country program from the ground up,” Smith said. “I’m looking forward to creating a robust program that will attract a lot of interest from our area and beyond.”

Athletics are funded by activity fees, which are meant for student engagement and foundational support, according to Parker. He added that PHCC has received more than half a million dollars in donations for the support of athletics since its inaugural season of NJCAA athletics in 2007.

“Both of these sports are financially feasible under the activities budget,” Parker said. “Already having the appropriate facilities on campus for these two sports made adding them into our lineup quite seamless. We see great potential growth and success in these two sports because our area high school volleyball and cross country programs are very sustainable. We’re also anticipating regional, statewide, national and international recruitment possibilities for these two particular sports.”

About 9.2 percent FTE (full-time equivalent) of the student population at PHCC is made up of student-athletes, Parker said, and the average grade point average for student-athletes is 2.8.

Athletic Director Brian Henderson said he looks forward to working with both Proffitt and Smith to sustain and produce positive athletic and academic results.

“We’re thrilled to have J.R. and Kelly take the reins of our newest athletic programs,” Henderson said. “J.R. is an avid runner, and he will bring his strength and conditioning expertise to building a strong cross country program. Kelly continues to foster and strengthen her community relationships, so we’re fortunate to have her build a successful foundation for our new volleyball program.”

PHCC was the first community college in Virginia to join NJCAA in 2007. PHCC President Angeline Godwin currently serves as a presidential representative for NJCAA and Parker serves as director of Region X women’s athletics.

To find out more information on these sports, contact Henderson at (276) 656-0313 or email bhenderson@patrickhenry.edu.