Ten graduates were recognized as Distinguished Alumni this year 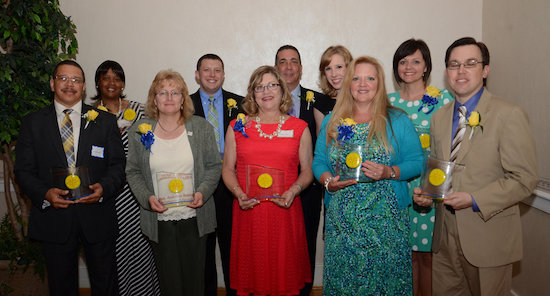 Each year, the Patrick Henry Community College Foundation names its Distinguished Alumni based on academic achievement, career success and community involvement. Ten alumni were chosen to be recognized as Distinguished Alumni this year, and were honored at a dinner on May 8 at Chatmoss Country Club. This year's recipients are: Anderson-Rusmisel earned her associate degree from PHCC in education in 1982. She continued her education at the University of Virginia, earning a bachelor’s degree in sociology and psychology, and a master’s degree in counseling and student personnel supervision. She received her doctorate degree from the University of North Carolina at Greensboro in curriculum and instruction in adult and higher education. Campbell earned his degree from PHCC in general studies/performing arts in 1999. He continued his education at Averett University with a bachelor’s degree in theater arts and at Radford University earning a master of arts in educational leadership.

He is employed by Henry County Schools where he has held several positions as a teacher and assistant principal. He now serves as the principal at Fieldale-Collinsville Middle School. He also is the artistic director for TheatreWorks Community Players, and is a member of the SCOPE 9 Cohort through the School of Continuing and Professional Studies at the University of Virginia. Carter is employed as an athletic external event coordinator at Liberty University where he is responsible for facilitating all external athletics events taking place on campus, as well as bringing new events to the university. He also is an active member at Thomas Road Baptist Church, and leads a team annually in the Ford Mays Liberty University Athletics Golf Tournament. Collins earned her associate degree at PHCC in arts and sciences in 1995. She continued her education at Longwood University earning a bachelor’s degree in liberal studies. She had a 22-year career in banking with Patrick Henry National Bank and Carter Bank and Trust, but decided to return to school in 2007 to pursue a lifelong dream of teaching. Cooper earned her associate degree from PHCC in 2005 in general studies. She continued her education at Old Dominion University with a bachelor’s degree in interdisciplinary studies, and earned a master’s degree in curriculum and instruction from Averett University. She is employed by Martinsville City Public Schools as the instructional coordinator at Patrick Henry Elementary School.

Cooper also serves as president of the Ridgeway Volunteer Fire Department’s Ladies Auxiliary, she’s active in 4H as a judge and camp volunteer, and she’s a member of Rich Acres Christian Church. She is an active board member with the Charity League of Martinsville and Henry County.

Gilbert is employed as an associate professor of sociology, human services and psychology at PHCC. Gilbert currently serves as a member of the American Psychological Association Society for the Psychology of Women; Virginia Community College System Psychology, Sociology and Distance Education Peer Groups; and the Virginia Community College Association. In addition to her work at the college, Gilbert participated in a mission trip to Guatemala last year and is planning an upcoming trip to work in an impoverished region of Appalachia. Parker graduated from PHCC in 2009 with an associate of arts and sciences degree through the Piedmont Governor’s School for Math, Science and Technology. She continued her education at James Madison University where she earned a bachelor’s degree in journalism.

She now works as a television journalist for WDBJ7 News in Roanoke. Before starting at WDBJ7, Parker was the bureau chief for WCTI TV 12 and FOX 8/14 in Jacksonville, N.C. She also is an annual volunteer for Richard’s Dinner in Martinsville, and she’s volunteered with the SPCA in Harrisonburg and was part of a telethon to raise money for cystic fibrosis in Jacksonville. Reynolds is employed as the assistant controller of River Community Bank N.A. in Martinsville. He is an active member of Mt. Nebo Holiness Church, and he’s been involved with the Boy Scouts for almost 20 years, now serving as assistant scoutmaster for Troop 69 in Patrick Springs. Reynolds also is an active member of the Patrick Springs Ruritan Club, serving in a number of leadership roles including president. Stone graduated from PHCC in 2009 with an associate degree in nursing. He earned a bachelor’s degree in biology/premed from Bridgewater College and is working toward a master of business administration at Liberty University. He now works as the director of emergency services for Memorial Hospital of Martinsville Henry County.

In addition to his work at the hospital, he also is an EMT (emergency medical technician), a CPR instructor, a scuba diver, a member of Bassett Church of the Brethren where he’s chairman of the Stewardship Committee, and a lifetime member of the Bassett Fire Department. He’s involved in a number of professional organizations including the Lifepoint Hospital Emergency Department Council, Piedmont Regional Crisis Intervention Team Advisory Council and as parliamentarian of the Bassett Rescue Squad. In 2014, he was presented with the CARES Award from Memorial Hospital. Tatum earned her associate degree in general studies from PHCC in 2008. She continued her education at Averett University and at Old Dominion University earning a bachelor’s degree in human services. She also graduated from Liberty University with a master’s degree in marriage and family counseling.

Tatum works as a college success coach, adjunct instructor and Dream Keepers coordinator at PHCC. She also is an active member of Trinity Church of the Living God in Stuart, where she is involved in many activities including two choirs, the usher board, and serving as secretary for State Council.