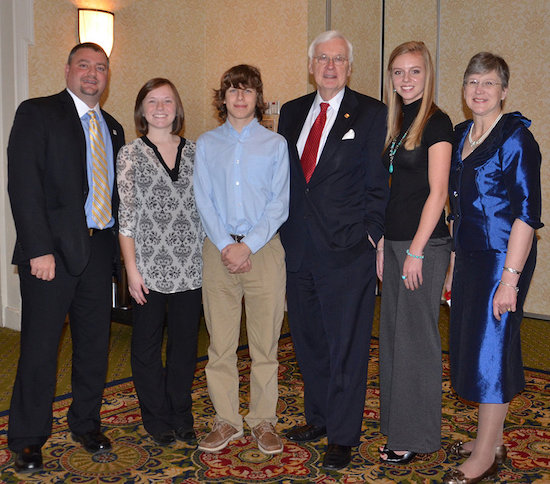 The Barry Nelson and Family Commonwealth Legacy Scholarship has been awarded to Taylor Keith of Ridgeway. The one-year scholarship will cover tuition and books for up to 15 credit hours at Patrick Henry Community College. Barry Nelson and his family recently won the 2013 Chancellor’s Award for Leadership in Philanthropy for their long-time support of PHCC. This scholarship was created to honor his ongoing dedication to the college.

The Honorable Gerald R. Baliles Commonwealth Legacy Scholarship has been awarded to Ann Taylor Foley of Bassett and Andrew Nolen of Bassett. Established in 2007, the scholarships (each for $2,550) honor the former governor’s dedicated and distinguished career in public service and pays tribute to his outstanding leadership as a champion of education in the commonwealth.

Keith, daughter of Amy and Stacy Perry, graduated from Bassett High School with a 3.9 GPA. She served as the senior editor of the Bassett High School Yearbook, which has consistently received a first-place yearbook award from the Virginia High School League, and participated in the O’Henry Internship program, working for the Henry County Commonwealth’s Attorney Office. Keith is also a student and teacher’s assistant at DeHart Dance Theatre. While interested in psychology and criminal justice, Keith is unsure of her future career. She hopes to earn her associate’s degree in general studies before transferring to a four-year institution.

Foley, daughter of Deborah and John Foley, graduated from Bassett High School with a 3.7 GPA. She was a member of the Beta Club and National Honor Society, as well as a volunteer with the SPCA, National Wildlife Turkey Federation and the American Cancer Society’s Relay for Life. Foley is also a horseback rider, riding and showing horses, as well as working with mentally and handicapped children at the Tactfully Teamed Riding Academy. She plans to attend PHCC to take prerequisite courses prior to transferring to Jefferson College of Health Sciences to earn a degree in occupational therapy.

Nolen, son of Debra and Mark Nolen, graduated from Bassett High School with a 3.7 GPA. He is a member of the National Honor Society and the National Technical Honor Society. He is also involved in the Boy Scouts, where he has become an Eagle Scout, a merit badge counselor at Camp Ottari in the summers, and the vice chapter chief for the Scout’s national honor society, the Order of the Arrow. Nolen plans to earn a degree in general studies before transferring to Radford University to study computer science.

Interested in applying for a scholarship? Find out how!