A 1978 graduate of PHCC and the chair of the Foundation Board, Collins received the prestigious title of Alumnus of the Year. 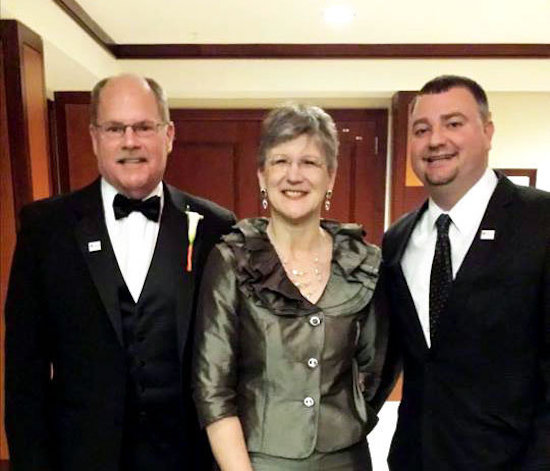 After hearing the news that he was named Alumnus of the Year from the Council for Resource Development (CRD), Gary Collins was very curious to know exactly what that would entail.

Collins, chair of the Patrick Henry Community College Foundation board, received this prestigious designation during the CRD’s 47th Annual Conference from Nov. 4-9 in Washington, D.C. He said after doing some research on the organization, he was “astonished” at how much it does nationally for higher education and honored for this special recognition.

He said the entire weekend was something he will never forget.

“It was just an unbelievable experience,” he said. “It’s definitely something I’ll always treasure.”

Collins arrived Thursday, Nov. 7 at the conference with his wife Susan, and was surprised by the arrival of each of his sons – Brent and his wife Katherine, Blake and Bryson. Also surprising him with a visit were Doug Payne, member of the PHCC Foundation board, and his wife Melonia.

During the banquet Saturday night, Collins delivered the keynote address, which detailed his experiences at PHCC and the concept of passion.

Although he wanted to start his college career at Virginia Tech after high school, Collins described a journey that turned out far better for his future.

“I enrolled at Patrick Henry with the intention of staying there for one year and then transferring, but I ended up staying and earning two degrees,” he said. “The closeness and the small classes provided a solid foundation for my future. I got involved in student government, many clubs, and I had some wonderful professors. But most importantly, I met my wife there.”

After he graduated from PHCC, Collins went on to graduate from Averett University with two bachelor’s degrees and then took a position with Stifel Nicolaus Financial, where he currently serves as senior vice president for investments.

Collins praises the entire college for its extensive number of programs, both traditional and unique. He said it’s been a joy to watch the college grow, both in student body with the growth of dual enrollment, and its foundation with an endowment in excess of $14 million.

“We’re able to provide much support for our students and college through scholarships and funding because of the staff we have now, and the leaders that made it what it is today,” he said. “In the future, with the help of everyone in PHCC’s service area, we’ll see the college continue its growth.”

Because of PHCC’s track record, Collins said it’s easy for people to support the college.

“We’re one of the few community colleges with buildings that have been completely donated and named,” he said. “Patrick Henry is just like a family member to me,” he said. “I’m so proud of the college and the growth it’s had, and the growth we have to look forward to in the future – not only for us, but for the entire community.”

Both Christopher Parker, vice president of Institutional Advancement at PHCC, and PHCC President Angeline Godwin nominated Collins for this award. Parker said there couldn’t be anyone more deserving of this recognition.

“Gary has done so much for the college over his career,” Parker said. “I greatly appreciate his dedication, hard work, leadership, and especially his friendship. He truly deserved this award.”

Godwin said, “Gary Collins represents the heart of our mission as a community college, where we serve students in their individual journeys from where they are to where they want to be. Given his passion, dedication and support of PH, we were honored to nominate Gary, a champion of student-centered fundraising, as the CRD Alumnus of the Year.”

Collins has been involved with Patrick Henry Community College since 1985. He served on the PHCC Local Board for two four-year terms, where he also served as chair for two of those years. This is his second term as chair of the Foundation Board. In addition, he’s been on various committees and stayed involved with supporting the college for the past 28 years.