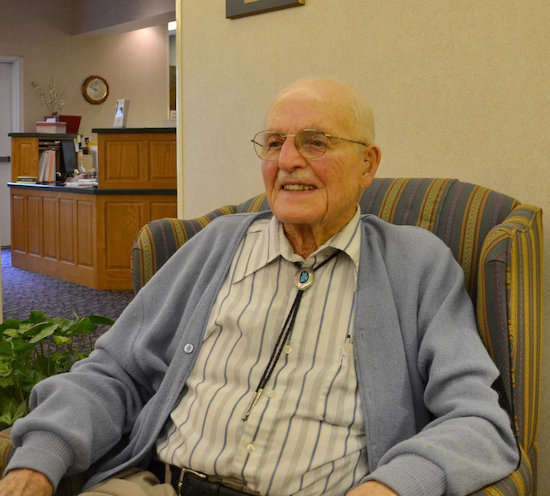 Shelton Scales died peacefully on Tuesday, May 27, 2014, at Kings Grant Retirement Community, having lived through 97 birthdays and 97 Memorial Days. He was born on April 28, 1917, during the First World War, and he distinguished himself during the Second. He was an insurance agent at Burch-Hodges-Stone in Martinsville for 36 years (retiring as its President); a founding member of the volunteer fire department; a founding member and elder at the Forest Hills Presbyterian Church; and a president and active member of the Kiwanis Club. But most of all, Shelton was a family man, devoted to Stacy, his wife of nearly 64 years, his four children, his grandchildren, and in later years his great-grandchildren.

Those are some bare facts; here are some details to try to bring them alive. When he was born (on a tobacco farm in Sandy Ridge, Stokes County, North Carolina), his mother, Daisy Shelton Scales, was 36 years old and his father, Joseph Abner Scales, was 69. That’s worth repeating. When Shelton was born (in 1917) his father was 69 years old and thus 13 years old when the Civil War started. And Shelton not only had an older sister (Fan) but a brother (Bill) five years younger than himself. So their father was more like a grandfather than a father to his children.

Growing up on a farm was far from a luxurious life, but it meant plenty of food on the table and thus shelter from the ravages suffered by so many others during the Great Depression. From the many stories he told, his childhood sounded like something out of Tom Sawyer. (Once, when caught by his elementary school teacher using a rubber band to shoot balls of lead foil at his classmates, he was told to bring this weapon up to her desk. But with his rubber band already loaded, and noticing a wasp on the high schoolroom ceiling, he couldn’t resist one last shot, which he made from the hip, and which miraculously hit the wasp and knocked it swirling to the floor, right there for all the girls to see.)

Shelton’s father (“Mr. Joe”) had very little formal education, but his mother (“Miss Daisy”), a former schoolteacher, made education a priority for the children. They bought a house in nearby Stoneville, North Carolina, where Miss Daisy took the children to stay during the week so they could attend school, while spending their weekends and summers on the farm.

Shelton graduated from Stoneville High School in 1934, but his mother, recognizing that the education he got there had not made him ready for college, arranged for him to have a year at Greenbrier Military Academy. From there he entered Lynchburg College, and the following year he transferred to the University of North Carolina at Chapel Hill, where he graduated in 1940 with a degree in business. (He told us that to get the final credits he needed to graduate, he had to take a business class in French! He calculated his chances of passing that class at just about zero. But fate intervened – in the form of the annual school picnic to which students could invite faculty members of their choice. Shelton, hearing opportunity’s knock, invited his French business professor – who, as it turned out, had never before received a student invitation to this picnic. For the entire afternoon, Shelton made a point of giving this professor all his attention, seeing he always had something to drink, someone to talk with, and in general doing everything he could to ensure he had a good time. Result: Shelton passed that class. Just barely, but he passed!)

It was at Chapel Hill that the most significant event of his life occurred – meeting his future wife, the lovely Stacy Crockett (whose uncle had been University President for a year before his death in 1919 from the influenza pandemic and for whom Stacy Hall was named). Shelton and Stacy were married the following year, on New Year’s Day, 1942 – twenty-five days after the bombing of Pearl Harbor.

During World War II, Shelton served in the Marine Corps, first as an instructor at the Officer Candidate’s School in Quantico, Virginia. Later, as the war intensified, he was transferred to Camp Pendleton in California to prepare to lead men into combat. His Division was stationed in the island paradise of Hawaii but fought in the hell of the South Pacific: Roi-Namur, Tinian, Saipan, and – most hellish of all – Iwo Jima, where one-third of all Marine casualties during WWII occurred. There, as a Major in a Lt. Colonel’s role, he commanded the 3rd Battalion, 23rd Marines, 4th Marine Division. On D-Day, February 19, 1945, his battalion landed on the beach at Iwo Jima; when they left 38 days later, Shelton was one of only five battalion commanders out of the 24 who landed on that island not to be killed or wounded. (For his bravery and leadership on Iwo Jima he was awarded the Silver Star, but the guilt of being a survivor when so many good men had died stayed with him the rest of his life.)

He was very proud of being a Marine, and he often told his children stories of his Marine days at Quantico and at the 4th Marine Division headquarters on the island of Maui – but not stories about combat. That only came much later, when his children were adults with children of their own. And in his last years, his wartime stories almost always ended with his shaking his head and saying how mankind had to find a way to end the insanity of war.

After the war Shelton and Stacy, with their daughter Judy, moved to Martinsville, Virginia, where they raised their family and lived out their lives. While others knew Shelton as a Marine, or an insurance agent, or a member of the Presbyterian Church or Kiwanis Club, his children knew him as a devoted father. He was especially fond of taking them and the dogs for walks in the woods, and equally fond of reading to them. Their imaginations were stirred by the thrilling adventures of Tarzan of the Apes and other books by Edgar Rice Burroughs, and by the tales of heroic anthropomorphic dogs in books by James Oliver Curwood (Kazan; Barrie, Son of Kazan; and Nomads of the North); and their souls were educated in Christianity by the somewhat less thrilling books by Fulton Oursler (The Greatest Book Ever Written; The Greatest Story Ever Told; The Greatest Faith Ever Known).

Shelton enjoyed a good story and a good joke, and his boyish side showed itself when he played occasional pranks on his children. (Once, while reading a Tarzan book to son Joe, aged 8, at a climactic moment, when Tarzan was making his way across a desert, weak from thirst and the blazing sun, while Scar the vulture circled overhead, the mighty Tarzan collapsed and crawled under a desert shrub and – Shelton added somberly – there he died! When he saw the open-mouthed look of incredulity on his young son’s face, he couldn’t help laughing, whereupon his son hit him on the arm as hard as he could. Shelton enjoyed telling that story many times over the years.) He had a remarkable memory, and he loved to recite poems and limericks at family reunions and whenever he could work them into a conversation with a visitor (and, yes, sometimes even when he couldn’t).

He cared about others, especially young people. He funded a scholarship at the local community college and was invited by some teachers there to speak in their classrooms about his remarkable childhood. He loved reading, sports (he was a die-hard Carolina fan), astronomy and botany. He passed on his love of learning to his children and he had an active mind, devoted heart and love of family until the end.

Shelton was preceded in death by his wife Stacy as well as a sister, Fan Scales Leake, a brother, William Nathan Scales, and a grandson, Richard Peterson. He is survived by his four children: Judy Peterson and her husband, Pete, of True, West Virginia; Joe Scales and his wife Carole, of Rocklin, California; Kemp Scales and his wife Eda, of Titusville, Pennsylvania; and Phil Scales, of Atlanta, Georgia, as well as eight grandchildren (Kemp Peterson; David and Elliott Scales and Maria Bucon-Scales; Norma Schmidt and Nathan, Marian and Austin Scales), and five great-grandchildren.

A memorial service will be held at 11 a.m. on Saturday, June 7, at Forest Hills Presbyterian Church in Martinsville, with Pastor Bradley Long and Chaplain Paul Johnson officiating. Friends may call from 7 until 9 p.m. Friday evening at Norris Funeral Home. Memorial contributions may be made to the Patrick Henry Community College, 645 Patriots Ave, Martinsville, VA 24112.